Digging deep for our diggers 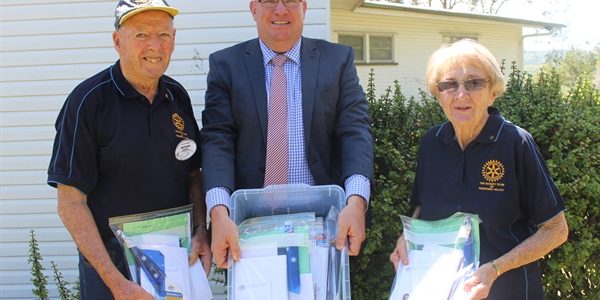 Soldiers serving abroad will get a taste of the Fassifern’s country hospitality this Christmas when the Rotary Club of Fassifern Valley sends 60 Digger Boxes to troops overseas.

The club will send the boxes through the Australian Government’s Support the Troops initiative, with items to be sent and packed by this Friday.

Donations of small, lightweight non-perishable goods are still being sought to include in the packs.

Federal Member for Wright Scott Buchholz, who has contributed 60 packs of puzzles, pencils, Australian flags, diaries, notepads, envelopes and writing paper, said it was a good opportunity to show care for the nation’s servicemen and women.

“This small gesture of goodwill means the world to our troops serving overseas at Christmas time, and it’s good to know we can band together to support them in this way,” he said.

“I commend the local Rotary Club of Fassifern Valley for its tireless work year after year in pulling these packs together for our diggers and I encourage everyone in the community to take this opportunity to contribute something small to the packs.”

Club Secretary Marjorie Porter thanked the community for its support.

“Each year when we send these packs over – and this will be our seventh year – we receive feedback indicating how nice it is when they’re away from home to know someone is thinking of them,” she said.

“We’ve tried to give them a taste of home, so each pack will include some Christmas goodies such as tinsel, a beanie for the winter and Aussie favourites like Tim Tams which are always highly sought after by the troops.”

To contribute to the Rotary Club of Fassifern Valley’s Digger Boxes, phone Marjorie on 5467 1404.