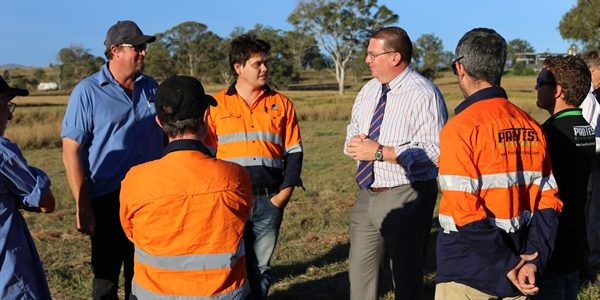 MOVEMENT is getting under way at Bromelton on a $30 million freight terminal tipped to lift the region into a new era of jobs, economic growth and progress.

Earth moving is expected to start on Monday, May 16 to progress work on the 130-hectare freight facility, which will bring 125 jobs in construction and 1000 jobs once the project is complete.

He said the project would give the region the confidence boost it needed to progress.

“This is like a beacon for not just Beaudesert but all of south-east Queensland – it gives us hope that there are brighter days ahead, and we can be optimistic about the future of our region,” he said.

“It’s time for jobs, it’s time for growth and it’s time for economic prosperity for this region – that is why the Federal Government has invested $9.6 million to make this game-changing project happen.”

Mr Buchholz said anticipation was already building for local jobs through the project, with Beaudesert based company Trade Alliance, which secured the contract, already advertising work.

“This is about boosting our local economy and I congratulate Trade Alliance – a passionately local company – on securing this tender and on their enthusiasm and faith in the local economy and jobs market,” he said.

Mr Buchholz said the SCT freight terminal was a game-changer for freight and logistics in south-east Queensland.

“This project is at the heart and centre of a region which relies on freight to get our local goods – particularly our world-renowned fresh produce – to market,” he said.

“Beyond that, the SCT site is strategically located on the dual gauge rail line between Brisbane and Sydney and will ultimately intersect with the inland rail freight corridor between Melbourne and Brisbane.

“The Inland Rail is a truly transformational project which the Federal Government is also investing heavily in, as demonstrated in our 2016 Budget which provides an extra $594 million to get Inland Rail on track.”

The SCT Logistics freight terminal is expected to be in operation by January 15, 2017.