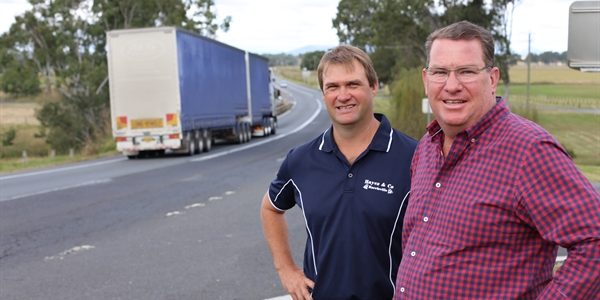 THE flood-damaged Cunningham Highway at Warrill View is set for a $12.5 million reconstruction through $10 million from the Australian Government.

Federal Member for Wright Scott Buchholz said the project – the first road rehabilitation at the site in more than 20 years – would improve safety, travel times and vehicle operating costs for thousands of motorists.

Work will be done on the highway from the intersection of Bath Street near Warrill View State School to 3km south, with construction expected to get under way in late 2016 and be finished by early 2018.

Mr Buchholz said the road upgrade was crucial for the safety of motorists.

“Warrill View, as we know, has copped some pretty bad flooding these last few years and all that water over the Cunningham Highway, plus a rise in the number of trucks and cars using it every day, has weakened the strength of the road,” he said.

“This section of the Cunningham Highway alone carries nearly 5000 vehicles a day, more than a quarter of which are heavy vehicles, so this project will make the road safer for thousands of motorists.”

He said it would also improve safety for locals.

“This Federal Government has recognised that this upgrade must be done for the safety of our residents, including the school children, families and staff of Warrill View State School who travel this highway every day,” he said.

“This upgrade will also make travelling the highway safer for our local producers, particularly those who frequently use the Cunningham Highway to cart cattle to and from the Silverdale saleyards.”

Hayes and Co auctioneer Craig Bell said the upgrade would give drivers greater peace of mind transporting livestock along the Cunningham Highway to the Silverdale saleyards.

“For us it’s the safety factor – this will definitely help us know we can get people safely to and from the sales and it’ll also mean a safer drive for those driving loads interstate,” he said.

The Cunningham Highway upgrade will also include a focus on flood immunity for the 3km section of highway, with the newly-laid road to be stronger to help with flood mitigation and future road use.

The upgrade will be funded through the Federal Government’s National Highway Upgrade Program.