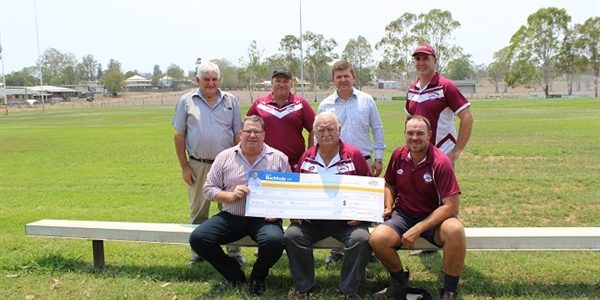 An invitation from Federal Member for Wright, Scott Buchholz to express an interest in the Australian Governments Stronger Communities programme has paid off for Hayes Oval in Harrisville.

The home of the Fassifern Bombers, Hayes Oval will receive $20,000 for lighting upgrades, Mr Buchholz announced.

Alongside State Member for Scenic Rim, Jon Krause, President of Hayes Oval, Paul Roderick and others from the Bombers community, Mr Buchholz announced the funding and there was clear excitement that the project was now able to progress.
“Our government is partnering with the community through the stronger communities programme to deliver better community infrastructure, to build resilience and encourage participation,” Mr Buchholz said

“I reached out to the crew at the Bombers and through Hayes Oval, we’re now going to see an investment in upgrading the lighting. The team here have done a marvelous job fundraising for the other 50 percent of funds required,” Mr Buchholz said.

President of Hayes Oval, Paul Roderick welcomed the Australian Governments contribution and thanked Scott Buchholz for the invitation to participate in the programme.

“We have got $20,000 to go towards the upgrade of the lights, they’re currently very inefficient, very dull and we’ll upgrade those to LED.

State Member for Scenic Rim, Jon Krause added that grants like these were important to ongoing growth for local clubs and the funding would be welcomed by the entire Fassifern community.

“A couple of years back I helped the Bombers get their changerooms and amenities upgraded – this grant continues the improvements, and good on the Bombers and Hayes Oval Committee for having a plan to build for the future. Everyone loves a good game of footy – throughout the Fassifern we’re behind the Bombers – this just means more people can get involved and more potential for use of the fields.

“There are a lot of kids who come down here and play, the lights will make it safer and encourage more participation – and that’s what it is all about,” Mr Krause said.

Scott Buchholz encouraged locals to make the most of the upgrades by attending games or contacting the Bombers to get involved.

“It was great to join Paul, Jon and others – leaving a cheque for $20,000 to install new lighting, replacing the old halogen lights. By investing in assets such as Hayes Oval we’re providing an avenue for greater participation and bringing people together.

“Reach out to the Bombers, get involved and make use of this community infrastructure.

The Stronger Communities Programme provides each of the 151 federal electorates with $150,000 to fund small capital projects. These projects aim to improve local community participation and contribute to vibrant viable communities. Federal MPs identify potential projects and invite applications from their electorate.