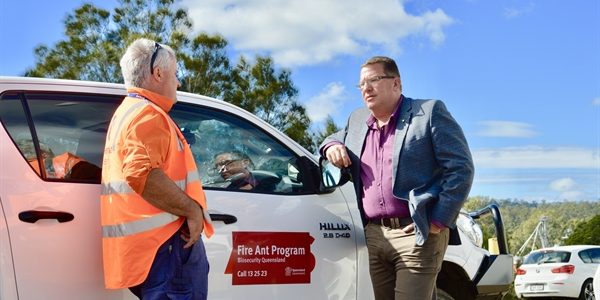 Residents and land owners across the Lockyer Valley know how important the land is to their way of life and how destructive the invasive Red Imported Fire Ants can be to their livelihoods.

Mr Buchholz recently met with the fire ant eradication team in Laidley to gain a greater understanding of the devastating economic, environmental and social impacts of the Red Imported Fire Ant.

“Red Fire Ants are one of the world’s worst, invasive species and pose a danger to human health and the impact on prime agricultural land, backyards and recreational areas across the Lockyer Valley,” Mr Buchholz said.

“Since 2001 the Fire Ant eradication team has done great work across Brisbane and South-East Queensland and without their work the Red Fire Ants could potentially have spread past Sydney in the south and Rockhampton in the north, that’s how serious the problem is”

Scott Buchholz said the Coalition Government late last year finalised an immediate 10-year $380 million plan with the Australian Government contributing half towards the fight to keep fighting the fire ant.

“This agreement and funding finalised recently will go a long way towards combatting this invasive species by containing and eradicating the ant across the Lockyer Valley and all of South-East Queensland,” Mr Buchholz said.

“I stand with the residents of the Lockyer Valley, and I’m committed to seeing this invasive species eradicated from our region.