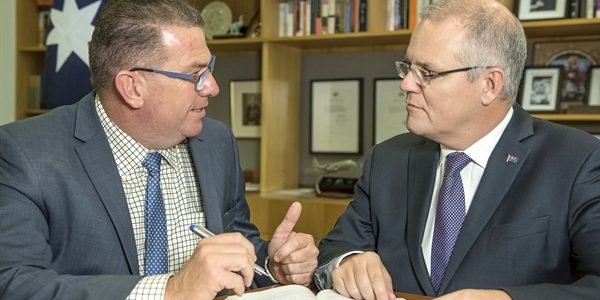 Local taxpayers are set to benefit for years to come – with the Coalition delivering historic reforms that will provide immediate income tax relief and tackle bracket creep.

“Yesterday’s vote in the Senate, which passed our income tax reforms in their entirety, was a huge win for locals. They will be paying less tax immediately – and incentive will be restored for them to get ahead in the future.”

“This isn’t a short-term fix – but a long term plan to ensure that taxes in Australia will now be lower, fairer and simpler.”

Mr Buchholz, who voted for lower taxes in the Parliament this week, said it was a “betrayal of workers” that Labor decided to oppose the cuts.

“It’s a disgrace that Labor won’t even back workers. The policy differences between the Coalition and Labor have never been more clear. We believe in lower taxes while Labor not only opposed our tax cuts but have their own plan to impose extra taxes on retirees, capital gains and negative gearing,” Mr Buchholz said.

“This week is further evidence of our core differences. The fact is, Bill Shorten plans to repeal the tax cuts and that means an extra $70 billion tax slug for Australian taxpayers in addition to Labor’s other tax hikes.”

Mr Buchholz said Labor’s approach threatened the 63,095 workers and their families in Wright who stand to benefit from the income tax relief of up to $530 a year.

“This is a win for all workers in our region who want to get ahead. It means that when you earn more, get a pay rise or work that extra shift, you won’t face ever-increasing tax rates,” Mr Buchholz said.

“The LNP fundamentally believes in smaller government and lower taxes. This week we delivered the biggest tax cuts in history. At the same time, our tax package is part of a plan that gets the Budget back into surplus and provides record funding for schools, hospitals and infrastructure.”

“It’s a responsible, balanced approach that is a stark contrast to Labor’s big tax and spend.”

“The choice for local residents at the next election couldn’t be clearer.”

By numbers:
– 63,095 workers in Wright to be better off under the LNP’s income tax plan.
– 94 per cent of Australian workers will not face higher marginal tax rate of more than 32.5c in the dollar.
– Over 10 million Australians will get tax relief, with 4.4 million Australians receiving the full $530 benefit.
– $70 billion will be ripped from tax payers over the next ten years under Labor.