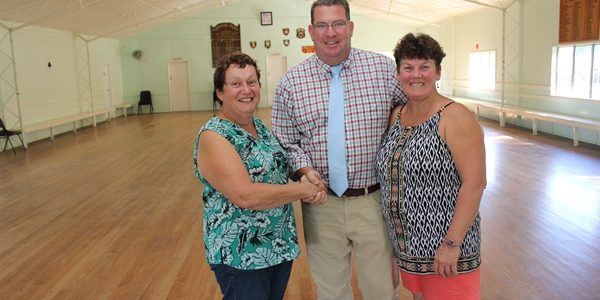 THE Roadvale School of Arts Hall will be painted for the first time in at least three decades after the hall committee secured a $10,000 Commonwealth grant.

The $21,144 face-lift – which the hall committee will pitch in for – is expected to breathe new life into the hall, which is a hub for community events including the popular Boonah Show Ball.

“This will brighten up the whole hall and give it a major facelift, which is what it needs because appearances do matter – particularly when people book the hall for formal events like weddings, engagement parties or birthday parties,” she said.

“In the 32 years I’ve been married and coming dancing in this hall it hasn’t been painted, so this will be the hall’s first paint job in at least three decades.”

Federal Member for Wright Scott Buchholz congratulated the hall committee on its success.

“The Roadvale School of Arts Hall is an important hub for this community and the hall committee works so hard to raise money to keep it in good order,” he said.

“This $10,000 Commonwealth contribution will go a long way to easing the pressure on our tireless volunteers and it’ll make a solid and lasting difference to the community of Roadvale.

“I’m proud to be part of a government which supports the work of groups like the Roadvale School of Arts Hall committee and I’m glad we could offer them some support in this project.”