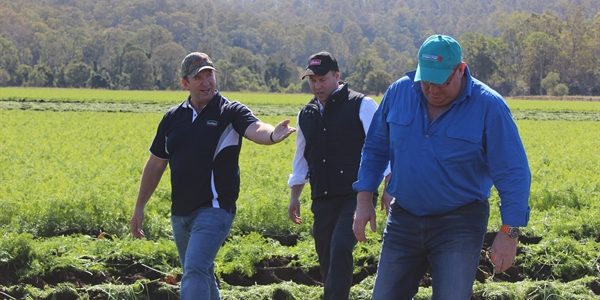 Primary producers in the region stand to benefit from projects funded by the Liberal National Governments Future Drought Fund, which passed the Parliament on Tuesday.

Member for Wright, Scott Buchholz said the Coalition had delivered on its election promise to farmers and growers across the region, particularly for the Scenic Rim and Lockyer Valley.

“Our Government is focused on regional and rural Australia and we made it a priority in this sitting week to ensure the Future Drought Fund was passed.

“Every year from next July, the fund will deliver $100 million in investment into drought preparedness and resilience projects,” Scott Buchholz said.

Projects to be financed under the fund could include climate adaptation, extension work, or region-wide projects such as pest and weed control.

“The farmers, businesses and residents in the region know all too well the impact of drought and just how hard this drought has been. I’ve visited and met with many of these producers and just recently had the Treasurer in my electorate to meet with them too.

“It was our promise to do this to support our farmers both for this drought and for the next drought, because we know, farmers know it will come.

The $5 billion Future Drought Fund means $100 million every year will be invested in drought resilience and preparedness. This is on top of the $1.9 billion in Farm Household Allowance, Rural Financial Counselling, mental health funding, low interest loans and more.

“The next step is for the Minister for Drought and Rural Finance, David Littleproud to form a consultative committee which would decide how the $100 million was invested, as per the legislation.

“It shouldn’t be a crazy idea to consult with the very people this will impact and serve to assist. That is what we’re going to do,” said Scott Buchholz.