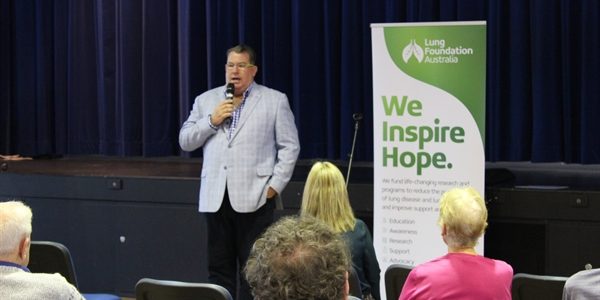 A free community morning tea will take place at the Nerang Bicentennial Hall on Thursday 31 October from 10:00am, with a number of guest speakers including oncologist Dr Suzanne Allan, lung cancer patient Michel I’Tel and CEO of Lung Foundation Australia, Mark Brooke.

Each speaker will provide an insight into the impacts of lung cancer on individuals and their families, as well as the important things residents should learn and know.

Scott Buchholz and Angie Bell are both encouraging their community to attend this public event, in order to learn about the impacts of lung cancer in the community, the importance of reducing the stigma for patients and improving patient health outcomes.

Mr Buchholz said lung cancer is the fourth most commonly diagnosed cancer among men and women in Australia.

“It is estimated that over 12,800 Australians will be diagnosed with lung cancer this year, tragically that is the equivalent 35 Australians diagnosed every hour.

“On average, about 351 people are diagnosed and 245 lose their lives to lung cancer each year on the Gold Coast,” Mr Buchholz said.

Ms Bell said it was important the residents were aware of ways to identify lung cancer, preventative measures and get involved in raising awareness and vital funds for research.

“Lung cancer is the fourth most commonly diagnosed cancer on the Gold Coast among men and women, after prostate cancer in males and breast cancer in females,” Ms Bell said.

“The Morrison Government has recently announced $960,000 of research funding into new diagnostic imaging technology to allow accurate assessment of lung function in patients, as well as a review by Cancer Australia of the potential for targeted lung cancer screening to be the next national cancer screening program.

“These are important measures in working to counter the inequities in health outcomes that currently exist for people living with lung cancer.