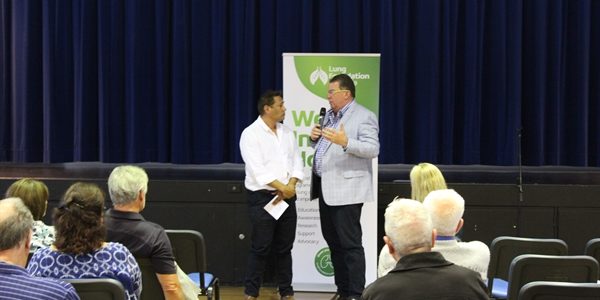 It is a leading cause of death and affects millions of Australians but awareness and understanding of lung cancer remains dangerously low.

Federal Member for Wright Scott Buchholz recently co-hosted a morning tea with the Lung Foundation of Australia, inviting community members to hear from a range of guest speakers including lung cancer patients, in an effort to raise awareness about lung cancer.

Mr Buchholz said he was surprised to hear that lung cancer is the fourth most-commonly diagnosed cancer in adults and the leading cause of cancer death in Australian men and women.

“The statistics are absolutely shocking, it is estimated that over 12,800 Australians will be diagnosed with lung cancer this year.

“Unfortunately, lung cancer does not demonstrate clear signs and symptoms, often going undiagnosed and ignored until it is in late stages. This is one of the reasons lung cancer currently has one of the lowest survival rates of any cancer, with just 15 per cent of people living five years past their diagnosis

Mr Buchholz said it was the indiscriminate nature of lung cancer which made it so dangerous.

“Lung Cancer does not discriminate. It affects everyone, men, women, smokers, non-smokers. One in three women and one in ten men with lung cancer have no history of smoking.

“One of the key topics discussed at the community morning tea was around awareness and barriers to increasing awareness. Shockingly, 35 per cent of Aussies lack empathy for lung cancer patients, believing it is their own fault or ‘..they are their own worst enemy..’, but we know this not to be the case.

Mr Buchholz said the morning tea was a real eye opener and exposed the way many patients were treated, characterised by low public awareness and negative stereotypes.

“It is time to get rid of the stigma around lung cancer and rally behind patients and their families. This is an awful disease, which no one deserves.

“November is Lung Cancer awareness month, take this opportunity to talk to family and friends, to do some reading, share a post on social media or event donate,” Mr Buchholz said.

You can take the first step to shine light on lung cancer by visiting lungfoundation.com.au.

· $960,000 has been provided for research into new diagnostic imaging technology to allow accurate assessment of lung function in patients

· Pemetrexed®, a medicine for the treatment of metastatic non-small cell lung cancer, and mesothelioma will also have its authority level reduced to make it easier for doctors to prescribe from 1 July 2019.