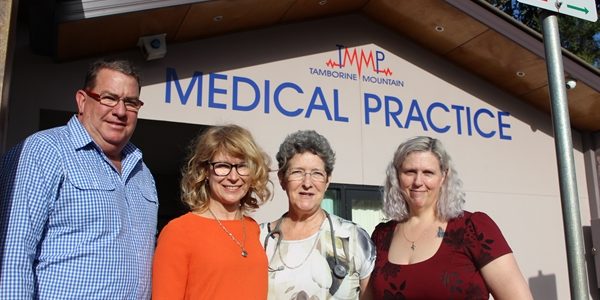 Federal Member for Wright Scott Buchholz and principal petitioners from the Tamborine Mountain Medical Practice are calling for all residents to sign and return the petition on the reclassification of Tamborine Mountain under the Modified Monash Model before June 30.

“Working with the Tamborine Mountain Medical Practice team and the local community, we’ve developed a petition that has been in the public domain for about three months.

“This petition is about building and demonstrating community support, so that the Department can see just how important this is to the local community.

“It’s now time to close the petition and take the next stepin advocating on behalf of the people of Tamborine Mountain and present the petition. First we need as many residents as we can get to sign on, so we are calling on all residents and patients that have not yet signed, to do so immediately and return it to my office before June 30,” Scott Buchholz said.

“Tamborine Mountain should not be considered part of a ‘major city’. It is unique up here,” Mr Buchholz said.

Dr Leeann Carr-Brown from Tamborine Mountain Medical Practice said hundreds of petitions had already been returned, but urged all local residents to get on board as there was still time.

“I thank everyone for taking the time to sign the petition and to those that have not yet done so, I urge you to visit the practice, one of the drop-off points or email Scott Buchholz’s office for a copy.

“We still have time to increase the number of petitioners – our end goal is 2,000 and we can certainly achieve that with community support,” Dr Carr-Brown said.

Scott Buchholz announced in April that the Department of Health had provided a temporary reprieve until January 2020, but vowed the fight would continue, because the uniqueness of Tamborine Mountain was not factored in.