BRIDGES’ RECONSTRUCTION A MILESTONE IN ROAD TO RECOVERY 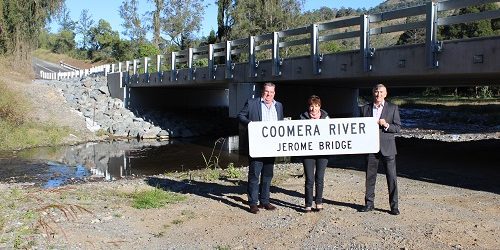 “Two years after Ex-Tropical Cyclone Debbie dealt a devastating blow to the region with widespread flooding, the Scenic Rim's journey to recovery is almost at an end,” he said.

“Scenic Rim was one of eight Queensland councils hardest hit by this extreme weather event which impacted large sections of our local road and bridge infrastructure, including Jerome Bridge and Bennett Crossing.

“Following assessment, both structures were approved for reconstruction with Betterment funding, jointly funded by the Commonwealth and Queensland Governments through the Betterment Framework under the Natural Disaster Relief and Recovery Arrangements (NDRRA).

“Once a culvert, Bennett Crossing has been reconstructed as a bridge and, along with Jerome Bridge, will be more resilient to future flooding.”

Cr Christensen said the forecast final cost of the reconstruction effort was $61 million, including Council funding of $3.4 million to the flood recovery program with further contributions yet to be finalised.

“We have not just recovered, we have made great improvements to our roads, thanks to the joint funding from the Commonwealth and Queensland Governments and Council's contribution,” he said.

“We are committed to ensuring the best value to our ratepayers through our investment in infrastructure that provides the impetus for the ongoing growth and economic development of our region and stands the test of time.

“Two years after Ex-Tropical Cyclone Debbie, I am pleased to say that our network of Council roads is now better than ever after the destruction this devastating weather event caused to our local infrastructure and community.”

Federal Assistant Minister for Road Safety and Freight Transport, Scott Buchholz, welcomed the progress of the work and the benefits for local commuters.

“This region was smashed by Cyclone Debbie, all three levels of Government came together and delivered millions in infrastructure investment to get the region back up and running again.

“The cooperation of the Commonwealth and Queensland Governments ensured projects such as the Jerome Bridge reconstruction and Bennett Crossing upgrade could go ahead.

Mr Buchholz said he was pleased with the progress and thanked locals for their patience during construction and reiterated the importance of these local projects.

“These are projects that do not just rebuild our roads, they make our communities more resilient by strengthening and flood mitigating infrastructure,” he said.

“While we do not wish for another Cyclone Debbie, we need to be prepared for it. By getting this work done, we’re better connected for the next extreme weather event the region will face.”