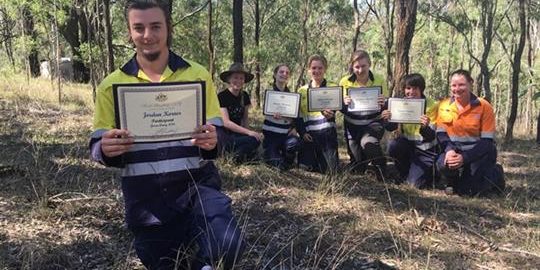 A PROPERTY set aside for koala habitat at Peak Crossing is in better shape than ever before thanks to the work of five local youth through the Commonwealth’s Green Army program.

The youngsters graduated from the federal government program on Thursday, October 6 2016 after eight months of hard work on the Queensland Trust for Nature site on Mt Flinders Road.

They cleared 40 hectares of lantana and fireweed, hitting double their target of 20 hectares, and completed 2km of fencing on the property.

Among the graduates was Jordan Korner, 22, of Roadvale.

The Boonah High alumnus, who wants to work outdoors, said completing the project gave him invaluable experience and skills to pursue his career goals.

For more information or to apply visit http://conservationvolunteers.com.au/green-army/queensland/