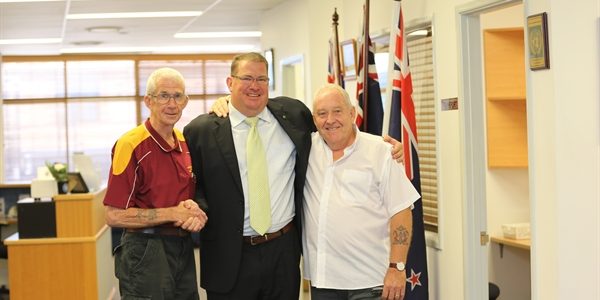 VETERANS will be able to seek support in a safer environment when the Beaudesert RSL Sub-Branch replaces its old and uneven carpet through a Commonwealth grant.

The organisation, which looks after the welfare of serving and ex-serving members of the Australian Defence Force and their families, will carry out the project through an $11,000 federal Stronger Communities program grant.

The $23,629 project – which the sub-branch will also pitch in for – will improve the safety of volunteers, staff and members using the office on Brisbane Street, Beaudesert.

Sub-branch president Errol Guilfoyle said securing funding to help buy and install the carpet – a purchase the organisation will make through Beaudesert supplier Andersens – was a major boost.

“Getting this grant is a huge weight off our shoulders because this carpet was already old and had plenty of wears and tears when we moved in to this building six years ago – we’ve had it re-stretched about three times but it’s just time for it to go,” he said.

“This project is crucial for safety – particularly the safety of our visitors, because our volunteers have learned to know where all the pitfalls are in the carpet and know which parts to avoid but our visitors don’t and the last thing we want is for them to have a fall.”

Federal Member for Wright Scott Buchholz congratulated the sub-branch on its success.

“The welfare support the Beaudesert RSL Sub-Branch offers current and ex-service men and women and their families locally is so important in the community and I’m glad this government could support them in this important project,” he said.

“I congratulate the sub-branch on putting in a solid application to secure this funding.”

Round two of the Stronger Communities program closes April 29, 2016.

Applications must be made at https://gms.infrastructure.gov.au/UI/

For help with the application process phone the Wright electorate office on 5541 0150.