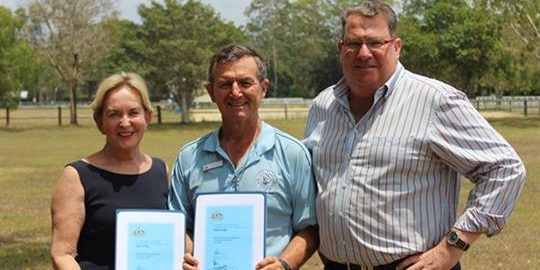 A local Clagiraba man and 48 year Veteran of the Australian Army, has had his over four decades of service acknowledged by Federal Member, Scott Buchholz and State Member, Ros Bates under the Federal Government’s Saluting Their Service Commemorations Program.

In presenting a certificate of appreciation to Gary Stone, Mr Buchholz said it is vitally important that we promote the high functioning and effective former members of the services who contribute to our community.

“Too often former service personnel are stigmatised against, many people assume that all veterans are suffering and in need of care. That’s not necessarily the case, there are guys like Gary who return and make an incredible contribution to our community, including to the veteran community, in this case through the Veterans Care Association.

“It is equally important that as a Government and community we recognise the contribution veteran’s make to our society because it is they, who have served and have made sacrifices, that have provided a blanket of security that our community sleeps under every night,” Mr Buchholz said.

Mr Stone said in recounting his 48 years of service that this is the first time he has formally had his service recognised by the community.

“I have served many roles including in the Malaysian Emergency as Platoon Commander, as the Commanding Officer for the Response to the Fiji Coup in 1987, I’ve lead a Peacekeeping Force in the Iran and Iraq War in 1998/99 and as a Chaplain in East Timor, Boganville and the Solomons.

“I think this is a great initiative which we should be offering certificates of appreciation to all veterans to help them, so they know that the community is supportive of them.

State Member for Mudgeeraba, Ros Bates thanked Gary for his extensive service to our country and highlighted the State LNP’s policy to support veterans into the future.

“As a proud mother of a veteran of the Australian Army, it’s fantastic to be here today to present this award to Gary Stone.

“We need to recognise and respect the contribution of our veterans all across the Country, and we want to make sure we do everything we can for them when they leave the army to find work here in Queensland.

“The State LNP has a Veteran’s Policy to make sure that veterans can get positions in the public service into the future so they have something to look forward to when they complete their service,” Ms Bates said.

The Department of Veterans’ Affairs (DVA) provides Certificates of Appreciation under the Australian Government’s Saluting Their Service Commemorations Program.