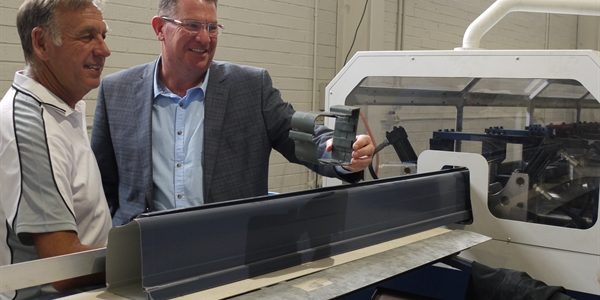 A WITHEREN man who established an innovative guttering company to stem the number of deaths caused by people falling off ladders has scored more than half a million dollars to further develop the product.

Local builder Alan Haley came up with the idea three years ago to make gutters which do not need cleaning.

Eaves gutters – which are the only product of their kind on the market – are designed to be enclosed so they don’t get clogged and don’t need to be cleaned but still collect water.

Mr Haley and Mr Horton patented their product globally, established a factory on the Gold Coast and also set up an extra base in New Zealand.

The gutters have generated strong interest locally, with people having them installed at Witheren, Tamborine, Tamborine Mountain, Beaudesert and Jimboomba.

The company also has its sights set on America and Canada in 2017 and they have even been approached by potential customers in Dubai who are fed up with their gutters being filled up with sand and falling off.

Now they have the means to keep up with their rapid expansion, with the $613,250 Entrepreneur’s Program grant tipped to take their success to the next level nationally and abroad.

Federal Member for Wright Scott Buchholz, who visited the Eaves factory to congratulate the company, said the product was a life-saving measure.

“We lose 500 people a year from people falling off ladders when they are cleaning their gutters each year and these local businessmen are doing an incredible thing in trying to address that,” he said.

“It is a highly innovative product, and it gives me great pleasure to see these entrepreneurs being rewarded for their efforts.”