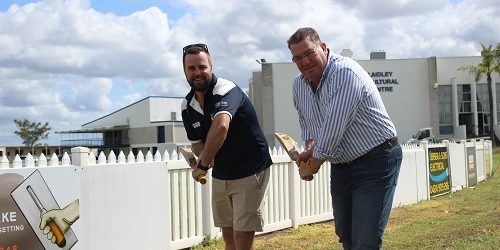 The Laidley District Cricket Club grounds will be safer with new CCTV cameras committed by Scott Buchholz, the Member for Wright, and the Morrison Liberal National Government.

Scott Buchholz recently joined members of the Laidley District Cricket Club and State Member for Lockyer Jim McDonald for the announcement that the Federal Liberal National Government would invest $36,737 toward security upgrades at the Club.

“The Laidley Cultural Centre and the cricket grounds have been targeted recently by vandals. Providing this funding means the Committee can get on with securing their assets and equipment,” Scott Buchholz said.

“Bichel Oval is an icon in this area, and cricket plays a big part in local recreational activity – so it is important the grounds are maintained and secured for years to come. Because we’re managing the Budget responsibly, we can deliver this investment for Laidley to protect this important community facility and help deter criminal activity,” Scott Buchholz said.

Laidley District Cricket Club member Chris Wilson thanked Scott Buchholz for the investment, saying it was appreciated by the Club and would go a long way toward implementing the security upgrades.

“We have experienced vandalism and attempted break-ins recently. Thanks to Scott Buchholz, we’re able to install new lighting and nine CCTV cameras to enhance security at the grounds,” Mr Wilson said.

Member for Lockyer Jim McDonald said volunteers and sporting clubs are the backbone of the community and that this commitment will make the grounds safer.

“Having local clubs such as the Laidley District Cricket Club gives local families a place to belong. It allows the community to enjoy a great Australian sport and helps keep kids off the street. Securing the facilities means the equipment is protected for all to use,” Mr McDonald said.